Here are 10 easy methods to repair the rear door latch on Ford F150. We have also added its common causes and signs of a faulty door latch.

An electric actuator controls the door lock mechanism in the Ford F150 with the power door lock. In most cases, both systems combine in one unit to make an assembly.

This entire system is known as a door lock actuator responsible for the door lock and unlocks system and its proper functioning.

The most prominent and common cause of the door lock latch or its damage is the weather stripping.

It can turn into distortion, and its proper functioning also becomes damage. The symptoms associated with this problem are the corrosion of exterior paint.

It can lead to the decaying of the inner door lock latch and destroy.

You can fix this issue by installing the new vinyl-weather stripping. If it is difficult for you to adjust it, you can insert it onto the door frame.

Rainy weather is also a source of its failure. In this case, there is a high chance that water can penetrate the door lock actuator connector.

It can result in random alarm triggering. It is not a tedious job to resolve this problem, and you can rectify it in two ways.

Identify the water source leak and repair it. Another way is in which you can buy the protective grease and seal the connector.

The assembly also has a switch that triggers the signals when the door becomes locked.

When any problem occurs with the button, it can lead to the door opening and the warning light still on even after it is closed correctly.

In this case, you should replace the whole assembly with the new best quality part.

When you use Ford F150 on bumpy or off-road journeys, they have to face dirt and dust and grim.

This dirt and dust find places to settle in joints and areas like latches of doors.

This accumulation of dirt accelerates corrosion and facilitates wear and tear latch cable and its joints. With time, it becomes so weak that it easily breaks with the door handle’s single push.

The latch does not correctly work when it does not fit on the strike plate.

It is primarily due to improper or misalignment of these can result in the door’s sudden opening during driving.

Sometimes, door proper lock and unlock is not done due to improper engagement with these inner systems.

There is another reason for this problem, like bolt improper adjustment. Another way is the cold weather in which there is the risk of contraction and expansion.

Behind the latch, the little black stopper is present on the door. During cold weather condition, the rubber becomes complicated, and prevent the latch from proper unlock.

You can resolve it by removing it and go to the service center to scrape it by the sanding wheel above ½ inch. Then, place it back to its position your latch will better without any problem.

Another way to resolve the door latch problem is by the screw.

In this case, you can lose the hinge screw a little bit and try to lock the door. If it properly works, then tight these adjustments.

Sometimes, the door cable breaks off, resulting in the malfunctioning of the lock.

These cables are mostly broken due to corrosion, especially when moisture penetrates the latch cable.

When we use the latch to open the door excessively, the wire erodes and breaks off from the handle.

For this, either you need to replace this broken cable or repair it. To repair door cable, you can use the cable repair kits.

The door lock cable connects the actuator to the inside door handle, which is also a component of the whole assembly.

If this part becomes damaged and you cannot obtain this from any source. In this case, you should replace the entire assembly with the new and exact quality product.

In cold weather conditions, rain, snow, or during washing, this problem usually appears. You can rectify this issue, which is less tricky and less time-consuming.

In this method, you have to focus on the elbow vent and remove it by rotating at 180 degrees. You make sure that its direction should remain upward.

You should avoid applying too much pressure on the grid. Two circular and oblong rubber plugs are also present at the bottom of the doors and remove.

By doing this, the airflow level increase, and water penetration decreases into the door. These cover the door handle screw hole; also remove them.

Next, purchase the lubricant spray from the official website online or store, and lubricate the latch mechanism.

The main property of this product is the hydrophobic nature. It can make a film over the latch and repel the water.

The best way to apply it is by too much coating and uniform distribution of the spray from different angles.

It will prevent the locking surface from freezing. This whole mechanism is not time-taking, and you can resolve it around 8-10 minutes.

Another way which is the home remedy you can resolve it. Use the hairdryer and blow it for 45-60 minutes. This method can warmth the door latch if your truck workhorse is low than normal.

The sealant also has the best adhesive property for the better working of the latch mechanism.

If the problem appears, you can go to the local truck dealer center, and they do the activity on the technical service bulletin on truck doors.

In this case, they separate the door and allow drying them. Then, apply the sealant to each opening. This method also resolves the door latch frozen problem.

Sign and symptoms of faulty door latch on Ford F150

Due to this failure, significant signs and symptoms appear, making the driver alert and notify them of the issue.

It alerts the driver to repair the problem or go to the service center to fix it. Here are few indications which will briefly explain.

When the wiring issue or any other internal problem arises, it results in the door locks behaving erratically.

These become lock and unlock quickly or occasionally, which causes disturbance for the passenger and the driver.

When the power door lock actuator wears out, which is the leading factor, it can lead to an unusual noise.

Most of these operate by the gears and motors that cause voice or noise but not louder enough to disturb you.

The actual headache starts when it becomes noisier due to the improper functioning or worn out of this inside system. It can lead to the failure of the door latch and actuator.

Disabling of a power door lock

The power door lock is also an essential component of your vehicle. It is the best security source in hurry condition and protects from robbery, thieves, and others.

Its functioning is quite simple, like after pressing the lock or unlock button, it sends a signal to the door lock actuator.

Sometimes problems appear in its systems like a blown-fuse, switch failure, and the entire system’s malfunctioning.

When the problem appears in the ford door latch resulting in its actuator’s failure and disabling of the power door lock.

These problems occur in all of this system move to the repair service center and resolve them.

How to replace the Ford F150 rear door latch?

Replacement of the rear door latch is not tedious work, and you can replace it in less time and a straightforward method. Here we will describe various steps one by one with a brief description.

Tools needed for this replacement

Pop up the covering behind the door handle manually. When you uncover it, you will find a small screw of appropriate size present inside it.

It can tighten the door handle so unscrew it with the help of a socket ratchet extension. The main concerning point is not to replace the bolt completely.

It should halfway out so that handle will lose and remove out easily.

In this way, you cannot lose your bolt. Scrap the sealing panel and remove it by the hand and also the upper trim as well. Under these 2-bolts are present, and you should remove them.

Remove the window switch and unplug all of these inside the electrical connector. Unscrew the bolt of the speaker and pull out and disconnect the back harness.

The removal of this part is essential, so disconnect everything from it. It includes some wiring, any other linkage. The panel does not contain too many push clips that fix it.

To release the door panel, pull the handle out and push it up. Next, all the harnesses from its back should unplug and remove the door panel from your truck.

In this case, first, remove the door panel insulation, and you should remove the clasp on the door handle rod for your interior door and detach it.

Unscrew the three torque screws, remove another rod from the clip, and latch, which connect to the assembly. Unplug all the electrical connectors from it.

Replace the vehicle’s actuator rod along with the power door lock after reinstalling the door latch and tightening the three torque screws. Engage the latch rod at the clasp and reconnect all electrical connectors.

Reconnect the courtesy light and all its wire harness and adjust the door panel at its position with screws and its pins and reinstall the door panel into its place. Place the door handle and screw it and all other essential components.

How to install tweeters in Ford F150?

Where should you place jack stands on Ford F150?

Can you decode a Ford truck VIN number?

How to change the transmission fluid in Ford F150?

Where to Place Jack Stands on Ford F150?

How to RV With Large Dogs? 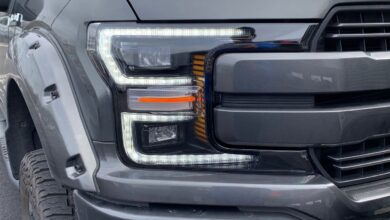 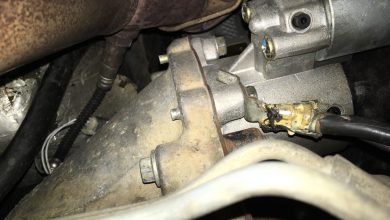 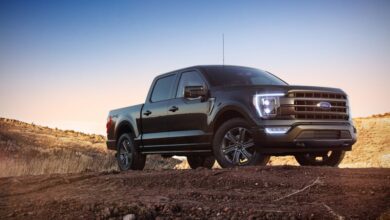 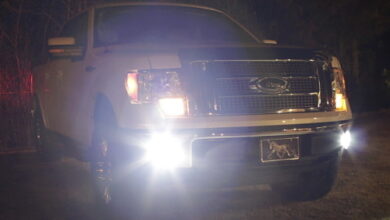